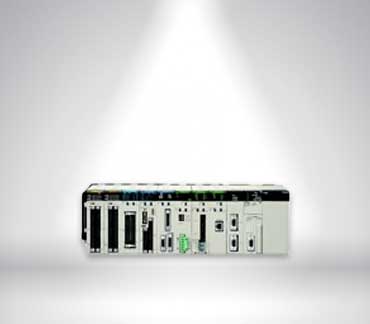 Heritage
Efficient Use of Valuable Assets

Use the improved CS1 PLCs to scale advanced systems to the optimum size.

Wide Lineup Makes It Easy to Build the Optimum System

Flexible System Building Based on the DeviceNet

The Solution for Communicating across Network Levels

A Wide Range of Systems, from Small-scale to Large

Duplex operation is possible for any or all of the following: CPU Units, Power Supply Units, and Communications Units.

Time Saved in Startup and Maintenance

A Variety of Positioning Functions

There are 2 operating modes: direct operation (position, speed, acceleration, and deceleration data specified from the ladder program), which is effective for setting target positions, speeds, and acceleration rates immediately or during operation, and memory operation, where fixed patterns are stored beforehand in the Unit and used for operation. There are also a variety of positioning functions, such as interrupt feeding, which is effective for feeder control, and forced interrupt, which is useful in emergencies.